Written by Debra Beck-Mewing on May 23, 2019. Posted in Blog, Buyer Tips, Property Investment.

On Monday 20 May 2019, at approximately 9.30 am, the Australian property market . . .shifted.  It was about that time when the implications from the result of the Federal election finally sunk in.

After three years operating under the threat of radical tax changes Federal Labor was definitely (they promised) going to implement, it took property market operatives just a few moments to double check that the Liberal Party really had been returned to power and to absorb the fact there would be no change to the legislative landscape.

And the rainbows keep coming

The unexpected win to the Liberals was not the only rainbow over the property market.  By Monday afternoon the general public was reminded of the new First Home Buyers (FHB) Loan Deposit Scheme announced during the election campaign.

Tuesday heralded the announcement that the Australian Prudential Regulation Authority (APRA) was withdrawing the 7% ‘stress test’ requirement, introduced in 2014 in a bid to strengthen borrowers’ ability to repay loans if interest rates increased, as well as cool the property market.

On Wednesday, news came through that the Reserve Bank was ‘considering’ dropping the cash rate, effectively hinting interest rates may drop.

By Thursday, one of the country’s largest developers – Harry Triguboff – announced his company – Meriton – would cease discounting the properties they have for sale.  Developers have been dropping prices, discounting and offering incentives over the past 12 months to entice buyers, but if Harry has stopped his discounting, rest assured the remainder of the market will follow.

To say we’re living through a week for the record books is an understatement.  Buyer activity was starting to pick up two weeks’ prior to the election date of 18 May. Just the fact the election was soon to be over was enough to provide some certainty, but with the changes we have seen in the early days of a legislative future we can literally bank on for three years (hopefully) you can expect noticeable changes to buying activity.

Market forecasters have been cautious but positive about an increase in buyer activity and a bottoming out of the dip to purchase prices.  Of course, those of you who were holding out for further price discounts will not consider the outlook as ‘positive’.

In looking ahead, let’s hear from the property market analyst with the most consistent track record in predicting market activity, Louis Christopher from SQM Research.

So far the market this year has fallen by another 3.8%. Our base case forecast, released in our 2019 Housing Boom and Bust Report back in November 2018, was for a total 2019 dwelling price fall of between -3% to -6%. It would be fair to say that up until this past weekend the market was heading towards the bottom end of that forecast (-6%).

Readers of our 2018/19 Housing Boom and Bust report should now be put on notice that our Scenario 4 (a Liberal victory with interest rate cuts late in 2019) are now in play (see below for scenario schedule). 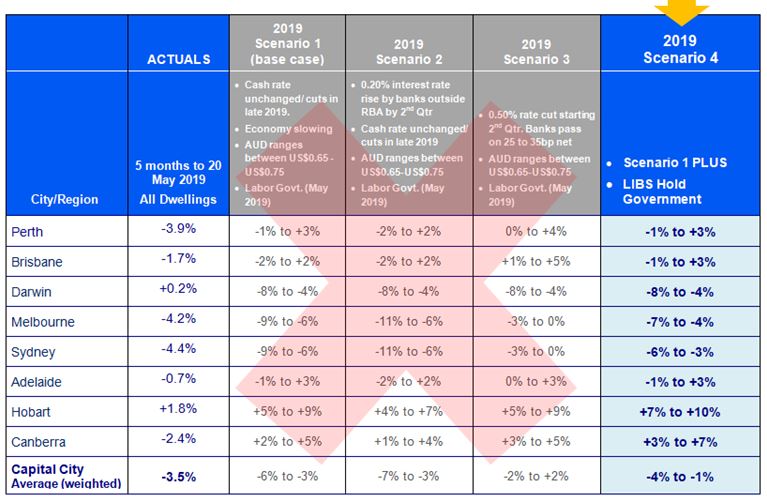 In a surprise, the Liberal National Party has won the 2019 Federal Election. While counting is continuing, it appears the Liberal Government will achieve majority in the House of Representatives and will face a dovish Senate where the Centre Alliance will hold the balance of power, notwithstanding support from the Conservative Party and One Nation.

That means it is likely the national housing market will record a price fall for this calendar year of between -1 to -4%.  This is less than our Scenario 1 forecast which tipped a -3 to -6% price decline.

We believe the Liberal victory means increasing buyer confidence in the market which was severely lacking as a result of the anticipation of the change in negative gearing and capital gains tax by a Labor Government.

While our Scenario 4 suggests price falls for the full year, note the price falls already recorded. Our view is that dwelling price rises may materialise from the 2nd half of the year as demand increases as a result of the expected improvement in confidence.

However, there have been two key developments this week which may well mean there is risk to the upside on our Scenario 4 forecasts.  Scenario 4 does not take into account additional loosening on credit lending.  This week APRA announced it is dropping the 7% theoretical interest rate for banks to use when calculating serviceability by borrowers.

Banks will be allowed to set their own minimum buffer instead, notwithstanding they still need to test if a borrower could still service a loan assuming a rate 2.5% higher than the lending rate applied to the borrower. In other words, if you are applying for a loan with an interest rate of 4%, the bank will test to see if you can handle an interest rate of 6.5%.

In our view, this is another significant move by APRA to loosen present day lending restrictions and place more responsibility on the banks to determine their own limits. This move should mean that more loan applicants will qualify for a loan and/or their borrowing limits will increase.

There is now more emphasis and weight applied to a more conservative use of HEM [the Household Expenditure Method] and credit control reporting, which is a good thing and should ensure reasonably responsible lending and therefore place a reasonable anchor on the market.

I initially believed APRA’s move was part of a strategic decision by the RBA to loosen credit restriction instead of relying on a further easing in monetary policy to stimulate housing, however, after this week’s statement by the Reserve Bank, it appears a cut in the cash rate next month is almost a certainty.

Scenario 4 does not take into account an earlier than expected rate cut. There are an increasing number of economists who are expecting rate cuts this year, starting as early as the first week of June of up to 50 basis points.

If there was such a cut over the course of June, July and/or August, it is likely the market would respond and demand for residential property would increase over and above our Scenario 4 forecast. Needless to say a combination of loosening credit restrictions plus a cut in interest rates, increases the risk of another housing boom which I am sure that is not what the ‘powers that be’ would want, but they may well yet get.

Note, the Australian housing market still contains headwinds which include the following.

These headwinds should initially prevent another rapid housing boom from developing.  That is certainly our view if there is no rate cut.  However, if we are to see a rate cut of 50 basis points or more over the next 2-3 months, combined with the announcement by APRA, all cards are off the table for 2020.  And for 2019, our Scenario 4 estimates may well end up being too conservative with the risks plainly being on the upside.

Other quotes and opinions

Shane Oliver – AMP Capital, Chief Economist – “I expect that uncertainty around the changes to negative gearing and capital gains tax were factors weighing on prices. The removal of that uncertainty takes away the negative effect.”  Mr Oliver had predicted a peak-to-trough price decline of 25 per cent in Sydney and Melbourne, but he thinks the Coalition win will reduce that figure by around 5 percentage points.

Cameron Kusher – Head of Research, Core Logic – Because Labor had been widely expected to win the election, Mr Kusher says the projected decline in the market may have factored in the changes to negative gearing and capital gains tax. “But in terms of a recovery, there’s still some challenges for the housing market,” he said. “Sydney and Melbourne have become very unaffordable, interest rates are low, but it’s still a lot harder to get a mortgage than it has been over recent years.

“Maybe the rate of decline will slow a little bit, but I don’t see this yet as a turning point for the market that bottoming out is necessarily imminent.”

John Symonds – founder, Aussie Home Loans – advised the “confidence” levels would now steady instead of worsen. “This will give a big boost for confidence. The property market will settle down again now. It is going to get back to health.”

Andrew Boak – economist, Goldman Sachs – said the expectation of a Labor win had been priced in and now some of that will reduce risk. “We believe investors have for some time been pricing in potential longer-run headwinds linked to the ALP’s proposed reforms to excess franking credits, negative gearing/CGT, family trusts, and industrial relations. The [election] result may also reduce the risk of political gridlock as – relative to the alternative (ie, an ALP victory) – a governing Coalition stands a better chance of controlling power in the Senate.”

Adam Di Marco, Publisher, The Urban Developer – “All in all, “ScoMo’s Miracle” is a welcome result for the property industry by virtue of the certainty it provides for us [developers]. At the end of the day, that’s all our industry asks for.  However, our government is responsible for only part of the solution. With certainty now delivered, it is our responsibility as an industry to step up and build upon this.”

“We need to double down on the investment and innovation that has characterised the industry since the GFC – in spite of the churn and upheaval in Canberra. We have endured a forgettable period and look forward to something more promising.”

With each passing day more and more industry commentators are predicting a market upswing, and many are having a dig at the price dooms-dayers such as Martin North, but until around 7pm on Saturday night the property market was not looking like a bounce was in sight . . now it seems the bounce happened.  What are your views?