Fast train is on the way for AUS

There’s been plenty of talk about fast rail in Australia for quite some time, and until now we didn’t really have the population to support it.  The good news, particularly for those who have been keen to see our major cities linked with efficient transport, is that the time has arrived . .maybe.

Four potential routes have been identified as the starting point for investigation into a NSW fast rail network. They are: 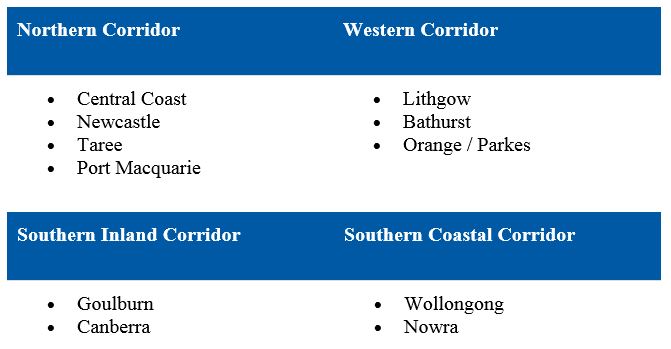 The NSW Government has appointed Professor Andrew McNaughton to lead an expert panel provide advice to the Premier and Deputy Premier on how the government should best deliver a fast rail network to connect the state.

The panel will identify opportunities for regional growth and improved services, and present the blueprint for how the government will deliver the network. The panel will consider the possible network options and advise on staging and delivery strategies.

Professor McNaughton has more than 45 years’ experience working on rail infrastructure projects. He is a Strategic Adviser to the UK’s High Speed 2 project and Chair of the International Railway Union World InterCity and High Speed Forum. High Speed 2 is a new high-speed rail network being built in the UK. The first phase between London and Birmingham will be completed in 2026. High Speed 2 promises to be a catalyst for economic growth as faster and easier travel between Britain’s economic hubs in the north and south will better connect industries and people.

A NSW focus for fast rail

Long-distance fast and high-speed rail studies have been undertaken in Australia over many years. These studies have usually focused on linking the major Eastern Seaboard cities of Sydney, Brisbane, Canberra and Melbourne. These studies focused on rail as a competitor to air and road transport options. Most of the studies found the costs and required ticket prices of an interstate high-speed rail network would be insurmountably high compared to likely customer volumes.

The delivery of fast rail has the potential to slash travel times by up to 75 per cent. A selection of approximate travel times are outlined below. 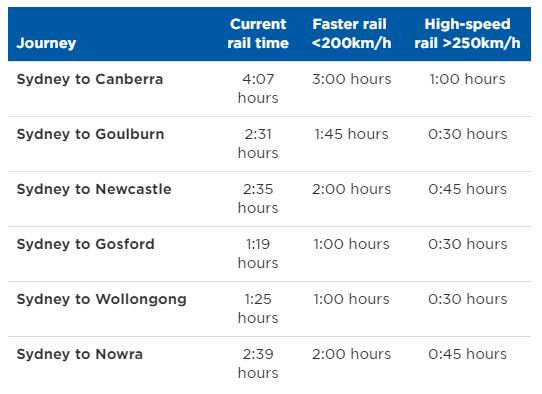 Sydney to Melbourne in 40 minutes?

The times above would be great, but there’s another option in the works.  While not as far along the planning phase as the NSW activity, the idea of a Hyperloop has recently been pitched to Federal and State government.

Hyperloop Transportation Technologies has made a submission to a government inquiry asking it to consider the benefits of the high-speed technology.

The hyperloop system would allow capsules contained within large tubes to travel as fast as aeroplanes, with a maximum speed of 1223km per hour.

At this top speed Australians could travel between Sydney and Melbourne in under 40 minutes, and the journeys between other major capitals would include Melbourne and Canberra (about 23 minutes), Canberra and Sydney (14 minutes), Sydney and Brisbane (37 minutes), and Adelaide to Melbourne in just over 30 minutes.

But the technology, which was first conceived by Elon Musk in 2012, has not yet been proven.  No system has yet been built in the world, although Virgin Hyperloop One has built a full-scale test system in Nevada and HyperloopTT is constructing a short 320 metre system in France as part of a facility to test it.

HyperloopTT is now hoping the Federal Government will fund an innovation hub to help prove the technology is safe, efficient and feasible.

It also wants the government to take a leading role in evaluating and regulating standards for the autonomous systems and to fund a study comparing various modes of autonomous travel.

Many are skeptical the point-to-point technology will work, although its potential benefits could be transformative.  It remains unclear whether commercial Hyperloop systems will ever be widely adopted. As the global population swells and the environment declines, however, better mass transit systems will become essential.