The producers of the 60 Minutes story on the Australian property market – which aired on Sunday 16 September 2018 – must have enjoyed the reaction from the property industry and the general public.  However, it’s really hard to understand how they’ll avoid accusations of misleading the public when you hear the full story.

The story titled ‘Bricks and Slaughter’ comprised a series of interviews with some prominent industry commentators, including a few who are actually reputable.  One interviewee – Martin North – has outlined his account of the information he presented to 60 Minutes, and how any negative commentary was emphasized.

In a similar vein, read on for the account of one of the country’s most reputable property analysts – Louis Christopher from SQM Research.

I was disappointed and unhappy with how the 60 Minutes segment Bricks and Slaughter, which aired on Sunday and sensationalised the country’s property downturn.

The interview I conducted with the 60 Minutes team spanned approximately 45 minutes, of which approximately one minute was featured in the segment.

I stated in my interview with 60 Minutes the risks as well as the safety valves that are still present in the property market, including strong local economies, strong population growth, banks very unlikely to fail, the RBA and/or the Federal Government likely intervening in the property market should the market quickly deteriorate. The program covered my comments on the risks and overvaluation only, which distorted my views.

During the interview, I actually covered the following:

Crash unlikely
Overall, I think a full blown housing crash scenario playing out is unlikely. What is far more likely is that Sydney and Melbourne will record further ongoing price declines, followed by a lengthy period of price stagnation. The magnitude of those price declines still depends upon future events that have yet to unfold, if they do at all.
A housing crash in Sydney and Melbourne is unlikely for the following reasons:

This all said, a housing crash, however unlikely, is not an impossible scenario. A string of events could materialise that could translate to peak to trough declines in our two largest cities of greater than 20%.  Such events could include:

There is also the possibility of an adverse feedback loop whereby the housing market commences a correction which triggers a domestic recession. Such a recession could easily feedback into the housing correction, turning it into a crash. I am watchful of this scenario but I do believe governments would intervene to prevent this possibility.

I note some recent mixed signals in the economy via weakening retails sales data and new car sales data but other sectors of the economy remain robust including ongoing strong jobs creation.

Overvaluation still present
The Sydney and Melbourne housing markets though, despite the recent falls, remain excessively overvalued and in our opinion vulnerable to future negative adverse events. These events, while perhaps may not be strong enough to create a precipitous crash, may still create larger price falls than currently recorded.  These events could include:

SQM Research measures relative housing market valuation by studying dwelling price changes to changes in nominal GDP, which is a good measure of a nation’s total income. We have found there is a relationship between the two where in the past, excessive dwelling price growth over nominal GDP growth has eventually unwound. The charts presented (below) illustrate the relationship as well as where Sydney and Melbourne currently sit. 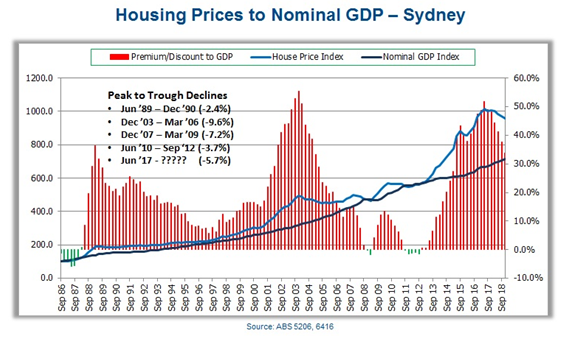 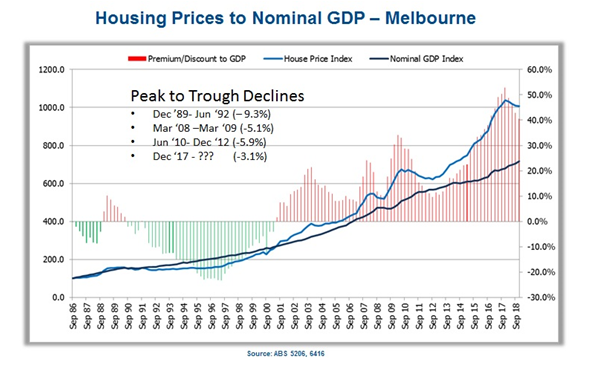 The red lines effectively represent the excess (in other words overvaluation) over and above of dwelling prices to nominal GDP while the green represents a discount (undervaluation).  The charts clearly illustrate that both Sydney and Melbourne are excessively overvalued. Indeed, on our numbers, Melbourne has never been more overvalued since the data began in the mid-1980s.

Our forecasts for 2019 will hopefully be released by November via the 2019 Housing Boom and Bust Report.

I do note that the current downturn has parallels with the one incurred by Sydney between 2003 to 2006. During that downturn, prices fell by 9.6% from peak to trough. The magnitude of overvaluation was similar to what we are experiencing now (indeed it was slightly worse on our numbers). The magnitude of oversupply that was in the Sydney market at the time is also similar to now.

Finally, banks also took some steps to restrict lending to new apartments in the Sydney inner-city market. The levels of lending restrictions now are greater than at that point in time. So the current thinking is that this current downturn will be at least on par with the 2003 to 2006 downturn. And given the price falls to date (down 6.5% for Sydney) the market will likely have a larger fall. How much more, we are very unsure at this stage as the final result will be driven by events (some of those mentioned above) that have yet to pass.

As per previous years, the Housing Boom and Bust Report will provide further evidence backed details surrounding our forecasts.

Overall the point of the exercise for me featuring on 60 Minutes was to note that any additional adverse events or adverse policy action could trigger a deeper correction which may have consequences for the economy overall. The property market is vulnerable right now and will remain that way until we see valuations return to more normal levels.

Unfortunately, the segment was sensationalist to say the least and so going forward, I have decided to only work with trusted reporters and to heavily rely on our newsletter to put forward any messages.

Louis  Christopher is recognised as one of Australia’s most respected and impartial research property analysts. He has extensive knowledge and experience of property, is regularly quoted in the media on his insights and is the founder and director of SQM Research.

SQM Research is an investment research house which specialises in providing accurate research and data to financial institutions, investment professionals and investors.  SQM takes an objective, candid and honest approach to the real estate market with a view to providing realistic insights based on factual, unbiased data.  From its core beginnings in residential property market data, SQM Research has grown to cover research on all asset classes.