Most of Australia’s capital cities will benefit from the interest rate cuts and loosening of credit restrictions to record dwelling price rises over 2020 with Sydney and Melbourne leading the charge, according to Christopher’s Housing Boom and Bust Report for 2020, released recently by SQM Research.
The base case forecast is for dwelling prices to rise between 7% to 11%, which is a strong bounce back from the price falls recorded over 2018 and the first half of 2019.

Sydney and Melbourne will drive the rises. The forecast is for Sydney to rise between 10% to 14% and Melbourne 11% to 15%. Other cities are also expected to record price rises. 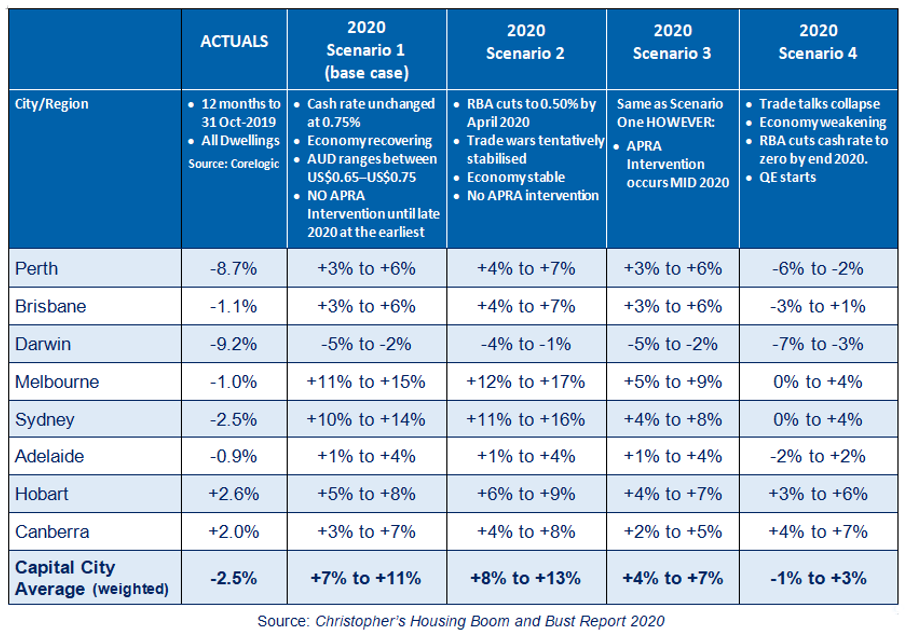 The base case forecasts assume no changes in interest rates and, importantly, no intervention by the Australian Prudential Regulation Authority (APRA). The base case also assumes a recovering Australian economy that has responded to the rate cuts of 2019 and reduced international trade tensions. One that is also been driven by ongoing strong population growth rates.

As a result of the improved international outlook and an existing recovery in mining investment, the city of Perth will finally record price rises next year after a prolonged housing downturn. The forecast is for Perth dwelling prices to rise between 3% to 6%.  Brisbane will also benefit from the recovery in mining investment and should also record price rises in the order of 3% to 6%.

Darwin is the only city expected to record price declines. The forecast of for prices to fall between -2% to -5%, as the Darwin economy continues to struggle and excess stock for sale continues to weaken the local market.

Louis Christopher, Managing Director of SQM Research said, “The Sydney and Melbourne housing markets have recorded a sharp turnaround in the 2nd half of 2019 following on from the surprise result of the Federal Election, interest rate cuts, the loosening of credit restrictions and ongoing strong population growth rates. These factors are expected to drive the national housing market into 2020. In a close call, APRA is expected to not immediately intervene despite the strong price rises.

“However we have some misgivings on the sustainability of this new recovery. Sydney and Melbourne are rising from an overvalued point. Long term, our two largest housing markets look vulnerable and forever reliant on cheap credit. Housing debt, while falling compared to GDP over 2019, is still very high. Better value can definitely found elsewhere such as Perth and Brisbane”, said Christopher.

SQM Research also anticipates an ongoing recovery in the Brisbane and Perth rental markets in 2020. While Sydney, will still likely record a fall in rents for the 3rd year running.

Christopher’s Housing Boom and Bust Report this year also has a full breakdown of every postcode in the country covering current market statistics and its postcode investor ratings. The full report can be found on www.sqmresearch.com.au for only $59.95.